Map contains an area larger than a letter sized paper (same map file as City Park and a portion of traffic heavy downtown). Map file download does not include any borders/legend/credits. Please include the following if you print the map: "Mapping: David Bakker (2018). © Sage Orienteering Club (2018). Contains information under the Open Government Licence - City of Kelowna."

In the Sage Nextcloud, this map file is saved under "Waterfront".

Updated in 2019 to ISSprOM2019 and some additional updates and expansion to the north. City Park portion was not updated.

Map file is the same as Cultural District, although this portion was not updated in 2019.

Delta Hotels Would Require Contacting if using their land - but were not very willing when last contacted (there is some potential for during non-tourist months of November through March). 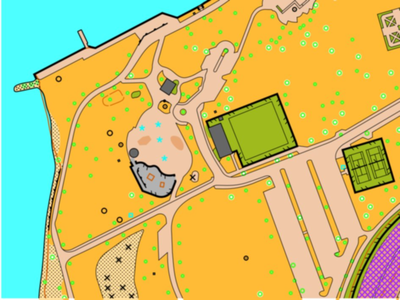