There are two different versions of this map. The download button links to a download folder instead of a single file, so that you can pick the file or your choice.

The old and (currently as of spring 2021) larger map of most of Kenna Cartwright Park.


City of Kamloops base map based on Photogametry; 1999 Allan Stradeski, 2000 Bryan Chubb; subdivision built in south east portion of map; major changes to vegetation in 2007 as a result of pine beetle; OCAD File type (.ocd) Has serious distortion issues of up to 100m in parts of the map.

The new and currently (as of spring 2021) incomplete (but usable in most areas) map.


City of Kamloops base map using basemaps using LiDAR based contours, and 2016 ortho-retified imagery. Made by David Bakker in 2017 using rock and water features from the old map, but completely remapping everything else from scratch including trails, new subdivisions, vegetation etc. Map not yet finished on northern side of the mountain (2017). Map updated to ISOM2017-2 with some drafting improvements in already mapped areas in early 2021, but no map expansion. 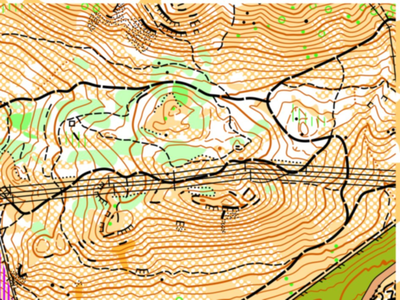